I was able to carve out a couple hours this past weekend to participate in the 2014 ARRL Field Day.  As I mentioned in my 2013 post, Field Day is a ham radio event that takes place the 4th weekend of June, where operators try to work as many stations as possible, while learning to operate in abnormal situations in less than optimal conditions.  People also use the event to test out emergency gear, get inactive hams back on the air, and allow unlicensed individuals (under supervision & coaching) to get on the air for the first time.

The abnormal situation they are referring to is having around 35,000 amateur radio operators working the bands at the same time.  If you ever thought that the radio bands were dead, take a listen during Field Day -- chances are every frequency will sound like you are in a room where dozens of people are shouting over each other.  This can make participation challenging for QRP operation (a.k.a. low power), which also happens to be my favorite mode of operation. 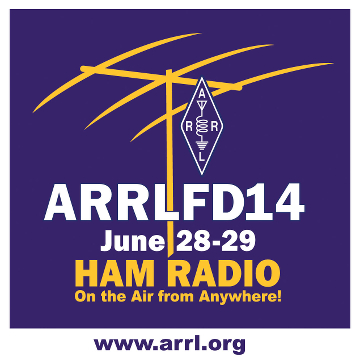 This has been the 3rd Field Day I've participated.

For my first Field Day (2011), I was a newly licensed General Class operator, and just a week prior had purchased my first HF radio, a Yaesu FT-817nd (which is still my main HF radio).  I had hoped to make some SSB phone contacts using a home brew slinky dipole (a mistake), a manual antenna tuner, and my radio with a max output of 5 watts.  Prior to the event, I had no idea what a Field Day QSO sounded like, and I had no idea that I needed to identify myself with an exchange and location.  It didn't really matter, because I don't think anyone heard my green horn station!  While I had fun, I have to admit that I found the experience a bit intimidating.  I had a lot to learn about efficient radio operation.

I decided to give Field Day a go again last year (2013), and operated a 1B Battery Western Pennsylvania station. This means I was operating a single person portable station on battery power (as opposed to commercial power).  I again chose to make contacts via SSB voice, but used my home brew 3' magnetic loop antenna.  I spent about 1.5 hours in the backyard with my radio and was able to make one contact.  I was determined to make at least one contact and I succeeded!  SSB voice is one of the most challenging modes to operate QRP, as voice uses a lot more bandwidth than CW or most data modes, and hence the signal doesn't travel as far.  When conditions are optimal, and the bands are a bit more quiet, you have a good chance at making a QSO at a nice distance.  But during Field Day, I was getting swallowed by the big guns.

Recently I've gotten into some digital modes, especially PSK31, as it is very efficient for low power communications, thanks mostly in part to the SignaLink USB I purchased at Dayton this year.  (My ultimate goal is to become proficient in CW, but I'm still a while off.)  For Field Day 2014, I decided to operate only using PSK31, into a tuned home brew dipole antenna.  I also decided to run my station indoors, but on emergency power (basically I didn't want to lug my gear outside this year), so I was a so-called 1E Western Pennsylvania.

Finally this year I had some decent Field Day success!  I only had time to operate for around two hours in total on Saturday (one hour at 2pm EDT when Field Day began, and another hour around sunset).  I made around a dozen contacts, which I was pleased with.  Mostly I replied to other's CQ FD CQ FD (calling all field day stations), but called CQ a few times myself.  I certainly won't be breaking any QSO records, but had a lot of fun.  It also gave me some experience making PSK31 contacts in some tight operating conditions.  When I flipped on my radio at sunset the waterfall in fldigi looked like The Matrix. 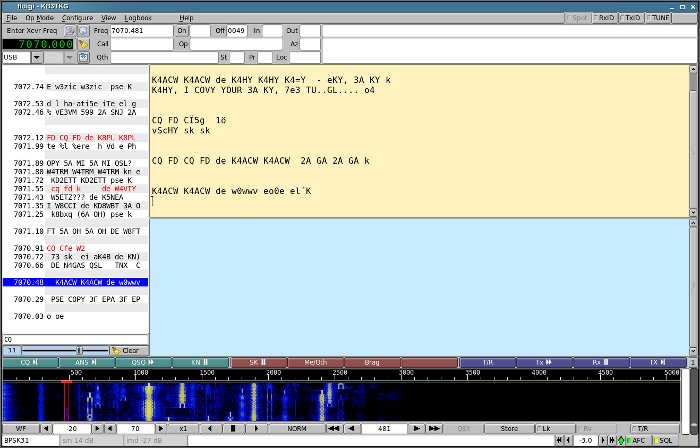 That's a lot of signals in 2.5kHz!  I set up a few Field Day macros (canned text sent during a QSO) to make my life a bit easier, and I was good to go.  If I had more time on the air, I know I would have racked up many more QSO's.

For reference, these were the macros I settled on: