One of my friends recently had a birthday, and I got the idea to make him a simple steampunk themed matchbox radio.  I'm not a steampunk expert, but I do know that devices should work without electricity.  So, what better than a crystal radio?

Crystal radios in their most basic form require no electrical power, and are directly powered by the radio waves floating around us.  Of course, you can add a little amplification to boost performance, like in my Altoids tin crystal radio, but it's not required. 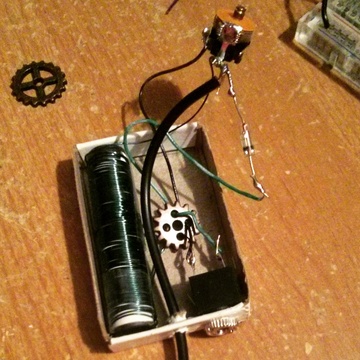 The heart of the crystal radio is a diode used as a detector, which has the ability to pull in amplitude modulated (AM) radio signals.  The most popular diode for this purpose is the 1N34 germanium diode.  You should be able to find 1N34 diodes in a number of online places, or at local hamfests.  I picked up a small handful at Dayton last year.

Combine the detector with a LC (inductance / capacitance) circuit and an antenna, and you have a basic tuned radio frequency (TRF) radio.  I used the same LC circuit used in in my rocket radio circuit (a 0-100 pF variable capacitor and about 70 turns of 26 gauge magnet wire on a ferrite core).

As for the antenna, the bigger the better.  Often these radios will be small and provide an alligator clip that attach to an antenna or large piece of metal.  I received pretty decent reception in my area, pulling in four local AM radio stations when clipping the radio to the cold water pipes or heating duct in my house.  When clipping the antenna lead to my 44' doublet, wow!  You can really hear some strong signals.  It's hard to believe that there's nothing powering the circuit other than radio waves.

To hear the signal (without amplification), you will need a so-called crystal earpiece, which is a special type of high impedance earphone, which are much more sensitive than regular headphones.

The schematic for a basic crystal radio looks like this: 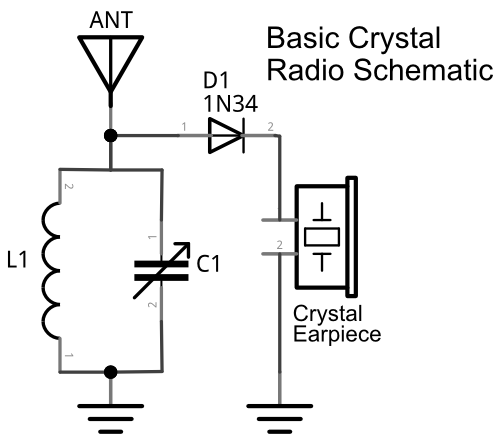 Here's a picture of the completed product.  The steampunk gear tunes the frequency! 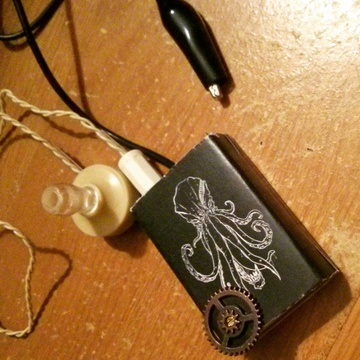