This past weekend was the 2015 Dayton Hamvention, the biggest convention dedicated to amateur radio.  I had the pleasure of attending for the first time last year and was happy to return this year.

My goals were: to pick up some components for new projects, enhance my station with some new equipment, shake hands with some of the folks I met last year, and enjoy a day trip with my father. 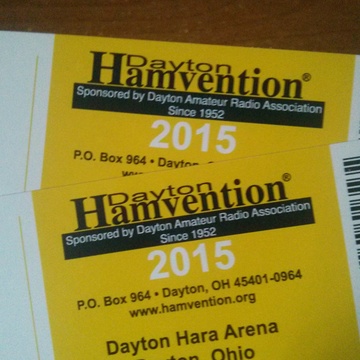 The first booth I stopped at was Debco, an electronics retailer.  From what I understand they used to be a storefront operation, but now sell components online.  I purchased some germanium diodes from them last year, and this year walked out with a little sack of some hard to find components: ferrite toroids of various sizes/mixes, more germanium diodes, and some other useful parts.

Next up was the Elecraft booth to pick up a KXAT3 internal auto-tuner for my KX3 tranceiver.  While at the booth I had the pleasure of speaking with both Eric and Wayne, the two owners of Elecraft.  I've mentioned before that I really admire their company and products, and it's always fun to talk to some of the brains behind the operation.

After browsing many indoor tables, we set for the flea market.  The highlight of the flea market, and perhaps the show this year, was meeting Dave Schneider of WJDI fame, a legendary AM (medium wave) radio pirate.  After stumbling across his booth, he started chatting us up.  I didn't know who he was, but he started regaling us with stories about this large pirate radio operation he used to run.  I admit that at the time, I thought he was exaggerating a bit, but when I got home and looked him up online it appears that everything he described actually happened, including some FCC visits.  His goal according to one website was to be known as the highest power pirate radio station of all time.  Considering that it seems that he ran a home pirate station with power over 10 kilowatts, I'd say he achieved this goal!  Read his story; it's quite entertaining.

Indoors again due to some impending rain, I met up with Thomas from SWLing Post, who was set up with a table for his non-profit, Ears to Our World.  I'm an avid reader of his website, so it's always fun to catch up with him.  He is a vintage radio buff, and we discussed many of the nice units he saw in the flea market.

The last and perhaps best purchase made this year was over at the Begali booth, where I picked up a set of Simplex Professional paddles.  I'm getting more serious about CW operation (more on that to come in a future post!), and wanted a nice set of quality paddles.  Begali is regarded as one of the top designers of paddles, and I must admit that being of Italian heritage I wanted to support an Italian company.  That edged them out over some other top paddle designers.  Completely irrational, but considering that Begali makes some of the best equipment out there, it wasn't a bad decision.  Both Piero and Bruna Begali were working the booth, and I had the pleasure of briefly chatting with Bruna.  As I said above, one of the best parts of Dayton is to be able to chat one on one with some of the people behind the top vendors in amateur radio. 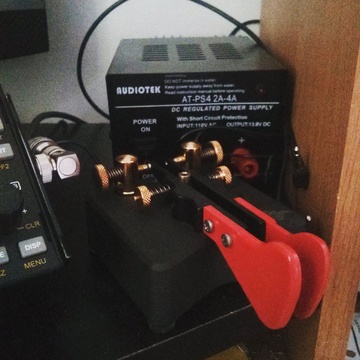 And that was a wrap!  We spent the better part of the day at Dayton, setting out at 5am from Pittsburgh, returning at around 7 or 8pm.  The weather generally cooperated, but we did get stuck in some heavy rain on the drive home.  But, at least it didn't hail on our heads like last year!