In my previous posts, I discussed a simple shortwave transmitter called the Michigan Mighty Mite and how to improve upon the design by adding a low pass filter.  With another simple addition we can turn this circuit into a low power shortwave pirate radio station!

We previously explored how adding an audio modulator to a transmitter will allow you to broadcast voice, music, or data via an AM signal.  We also explored how the LM386 integrated circuit can be used to modulate audio.  Now it's time time apply this to the Michigan Mighty Mite.

The following schematic shows the three stages of our circuit.  If you came across this article without reading my previous posts, and think this circuit looks difficult to build, it's not.  Each stage is simple enough for novices to build, and the circuit is interesting enough for RF electronics experimenters to learn something.  Hard to find parts can be found as usual by my recommendations here.  Novices should try to build each stage of the circuit separately and ensure each works before putting it all together.  The links provided for each stage cover in detail how each stage is built and how it works.

The first stage is the audio modulator built from an LM386 IC with minimal parts.  The modulated audio is fed into the second stage of the circuit which is the transmitter, configured for frequencies around 40 meters.  The output of the second stage could be fed directly into an antenna or dummy load, but instead we will feed it into a third stage, a low pass filter, to filter out harmonics generated by the transmitter.  The filter will ensure our signal only is present on the broadcast frequency, in this case 6925 kHz, a popular shortwave pirate frequency. 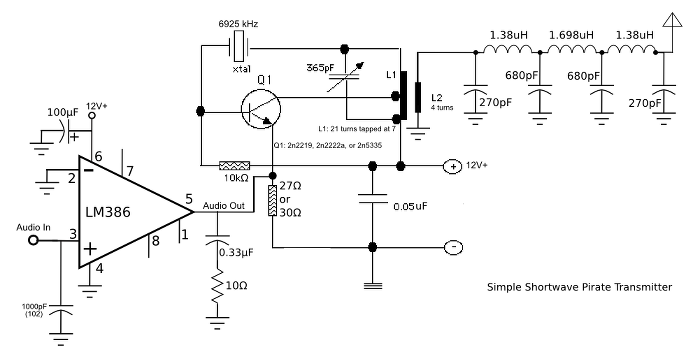 I recommend soldering this circuit up using perf board or using dead bug construction.  Breadboard prototyping doesn't always work well for RF circuits, as they can add extra capacitance into the circuit.  I was not able to get the low pass filter working properly until I soldered it up.  The transmitter and audio modulator do seem to work on a breadboard, so your mileage may vary.

Here's a picture of the completed transmitter stage connected to the audio modulator on a breadboard.  The transmitter is fed into a dummy load instead of the low pass filter, as I didn't want my signal to travel.  The audio input is just a monaural headphones jack that can be plugged into a phone, mp3 player, or anything else with a headphones jack. 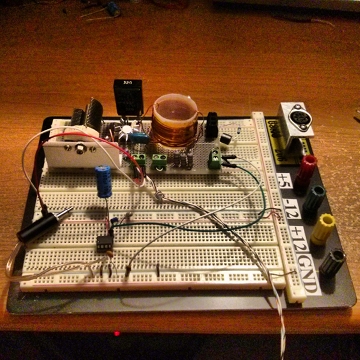 And this vine shows a clip of it on the air (hooked into a dummy load):

And that's all there is to it!  This transmitter will put out about 1/2 a watt.  But, a half watt on shortwave can travel quite far.  This propagation map courtesy of VOACAP shows what a a 1 watt AM signal would look like from my QTH of Pittsburgh, PA.  Unfortunately their calculator doesn't go down to 1/2 watt, but you shouldn't think of a half watt being puny compared to 1 watt.  A half watt is only 3 db down from 1 watt in signal strength.  As you can see from the map, the signal would have good coverage on the north eastern seaboard of the US and Canada. 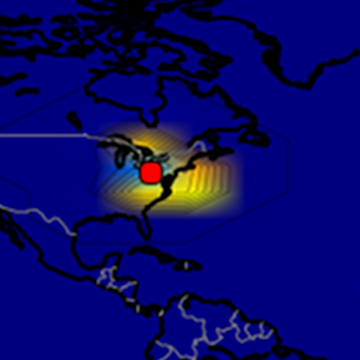 I don't advocate breaking the law or FCC regulations, but I do advocate experimentation; and building a pirate transmitter is fun and educational!  Everything I'm presenting in this article can be experimented with legally if you take proper precautions, like connecting a dummy load to the antenna output, which will limit the range of your signal to a short distance, likely within your home or property.  If you hook up a real antenna to the transmitter (yes, any length of wire is an antenna) you will run afoul of laws governing unlicensed broadcasts that are on the books in pretty much every country.  In the U.S., radio piracy is (unfortunately) a felony in a few states, and the FCC may impose stiff financial penalties if you are caught being your inner DJ.  So, you have been forewarned.  Bottom line, experiment safely and cautiously, with respect to others using the radio spectrum.

If you are interested in experimenting with transmitters, I encourage you to get a ham radio license.  You won't be allowed to broadcast a radio show, but a ticket does allow you to legally play with transmitters on a variety of interesting radio bands.  What could be better than that?!

Yes, you can use this same schematic to build a legal transmitter.  If you replace the 6925 kHz crystal with something within the 40 meters ham radio band, and hook the audio input to a microphone, you should be able to transmit AM phone.  If you hook the audio input up to your computer, you can transmit data and other legal modes.  All you need is a ham radio license with appropriate operating privileges (which would be General Class or higher in the U.S.).  And if you want to operate in CW mode, you can do so with a Technician Class license on 7030 kHz in the U.S.