This past weekend was an annual event, hosted by the ARRL called Field Day.  The general goal of Field Day is stated on the event's website:

To work as many stations as possible on any and all amateur bands (excluding the 60, 30, 17, and 12-meter bands) and to learn to operate in abnormal situations in less than optimal conditions.

Many ham operators use Field Day as a way to test out their emergency preparedness, running their gear off emergency power.  Other look toward the event as an annual get together among friends.  And, yet others use it as a venue to get others interested in amateur radio.

Personally, I was happy to be able to pull away from the regular routine for a bit and work my radio.  I also used it as an opportunity to set up my station outdoors, running off emergency battery power.

Running low power on Field Day is not for everyone.  The radio bands are full and noisy, and a small signal can get overrun by larger signals easily.  In all, I only made a single contact (to Tennessee) in the couple hours I spent in the backyard operating.  Most often I could hear a station well, but they clearly couldn't hear me over all the other stations out there.  After a while attempting to work a station, I moved on to a new target.

Was it time well spent?  Of course!  If anything, events like Field Day are great learning experiences.  Setting up a station on emergency power is a skill that could be critical one day, and testing out my gear is another plus.  I know my homebrew loop antenna is still working, since at least one guy out there heard me!

If you are a ham and haven't tried Field Day, think about operating next year.  If you just have a shortwave radio and some time, scan around the ham bands the 4th weekend in June to see who you can hear. 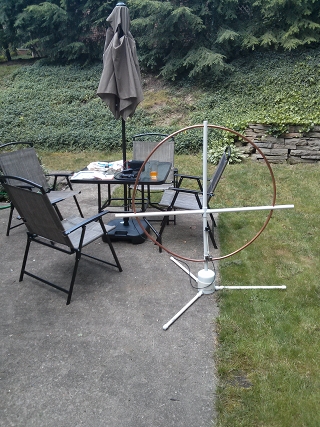 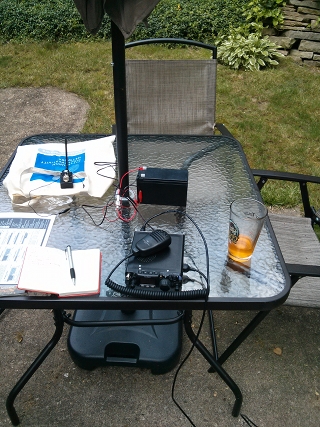